A Talk at Trafford College by Trustee: Tim Hotham 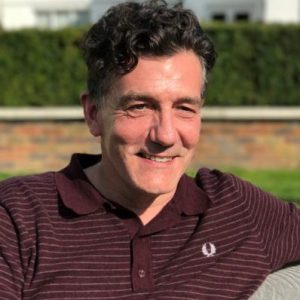 It was just over a year ago that I was invited for coffee by the man who managed to open my eyes to the truth behind all the lies I had been telling myself about the sexual abuse I suffered from age 8 to 12/13. What an amazing year that I want to reflect on, but first a bit of background…..
I’d kept silent until about 10 years ago when my life broke down on so many fronts and I was pointed in this man’s direction. His name is Duncan Craig and 11 yrs ago he had founded a peer support group called Survivors Mcr. I didn’t want to go, I was terrified, and I think I went to the front door and bottled it at least once. But somewhere, in the recesses of my mind I knew that if I didn’t tell someone what had happened I was going to end up in a place I didn’t think I would ever get back to sanity from.
I was an alcoholic, though not ready to admit that. I was everything that someone who buries sexual abuse has to deal with. I can’t and won’t say ‘Victim’ (Dunc wouldn’t let me). But I had lived a life full of fear, self-loathing, violence, self-destruction, guilt (misplaced) and a myriad other negative energies that had led me to a dark, terrible and lonely place. Duncan and Survivors shared with me their truths, they showed me love, they understood all of my fears, Duncan went with me to the police to give evidence about what had happened nearly 30 years earlier. This was just before the Jimmy Saville scandal.
Rewind back to that coffee, which was just over a year ago, 9 years after breaking my silence and I had stopped drinking, had treatment for PTSD, was working, happy and wanting to give back in some way.
Survivors Mcr had grown from just Duncan, his mobile phone and a room at the Quakers Meeting House once a week and was now a fully established charity helping people like me at a rate of 1 referral per day. That growth has since gone through the roof with all of the media coverage, storylines on soaps and incredibly brave people in the spotlight already due to their successful careers breaking their silence and standing as one.
Duncan asked me if I would be willing to sit on the board of trustees and act as a director of the Charity. I was so proud, not just because Duncan asked, but because to me, it was a testament to how far I had travelled in my personal journey, that he felt I was capable of doing this.
As I look back over the last year with pride and humility – a balance I sometimes get right now;
• I went to my first board meeting determined not to speak (that lasted about 5 seconds ;-).
• I learnt just how complex and vibrant the charity is and how many people it is helping rebuild their lives.
• I stood proudly in the Printworks when we launched the 1in6 Blue String UK with a singer/songwriter competition.
• I was at the North West Charity Awards where we picked up 5 awards/commendations. I met the man behind the Offside Trust (Steve Walter), I met Calhum Hancock, a professional boxer and an amazing guy who fought his biggest battle out of the ring and in the scrutiny of the country’s media.
• Unfortunately, I missed a couple of events put on by our Ambassadors Richard Gadd and Sam Thompson (both who won awards) and I have watched with pride the new offices being renovated with each therapy room designed by one of our amazing ambassadors, Charly Lester, James Sutton, Sam Thompson, Steve Walters & Richard Gadd. 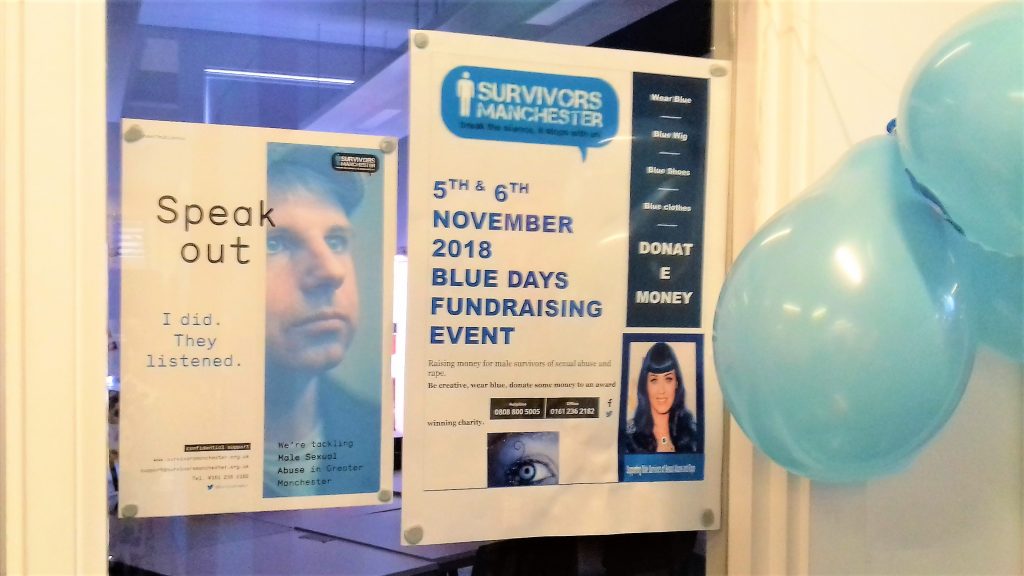 Personally, my proudest moment of the year was being invited to speak to two groups of students at Trafford College who will go on to be the social workers, teachers and protectors of the vulnerable in the near future. I told my story, I didn’t cry, I held my head up high, I spoke calmly but passionately about the issues faced by male survivors, my own experience of the journey of recovery and some of the impacts that I doubt people even consider;
• How hard it was to hold my own children as babies.
• How I used to feel uncomfortable taking them swimming.
• Feeling that now I had spoken out, people would look at me with suspicion at their schools.
• How, on driving to their campus I had to pass a road two streets away where I had been taken and pass around like a toy. A fact I only realised on the way there as I recognised the road and had a huge flashback!
• How, when my daughter hurt herself, I knew exactly why the police had been called, was glad they had (and told them so), but I had to keep running off to the toilet so my children didn’t see me breakdown.
The students were fantastic, I was overwhelmed by the notes they sent me thanking me and telling me how incredible they thought I was. I don’t feel incredible, but that day, I felt SPECIAL and I can’t thank them enough for that. They are currently raising money for Survivors, but far more important I believe, is that they are raising awareness of, and are more understanding of, the terrible secrets kept by both men and women who have been attacked and abused by the paedophiles who move amongst us.
Silence Kills #Breakthesilence