CEO Blog: And The Winner Is… SURVIVORS MANCHESTER 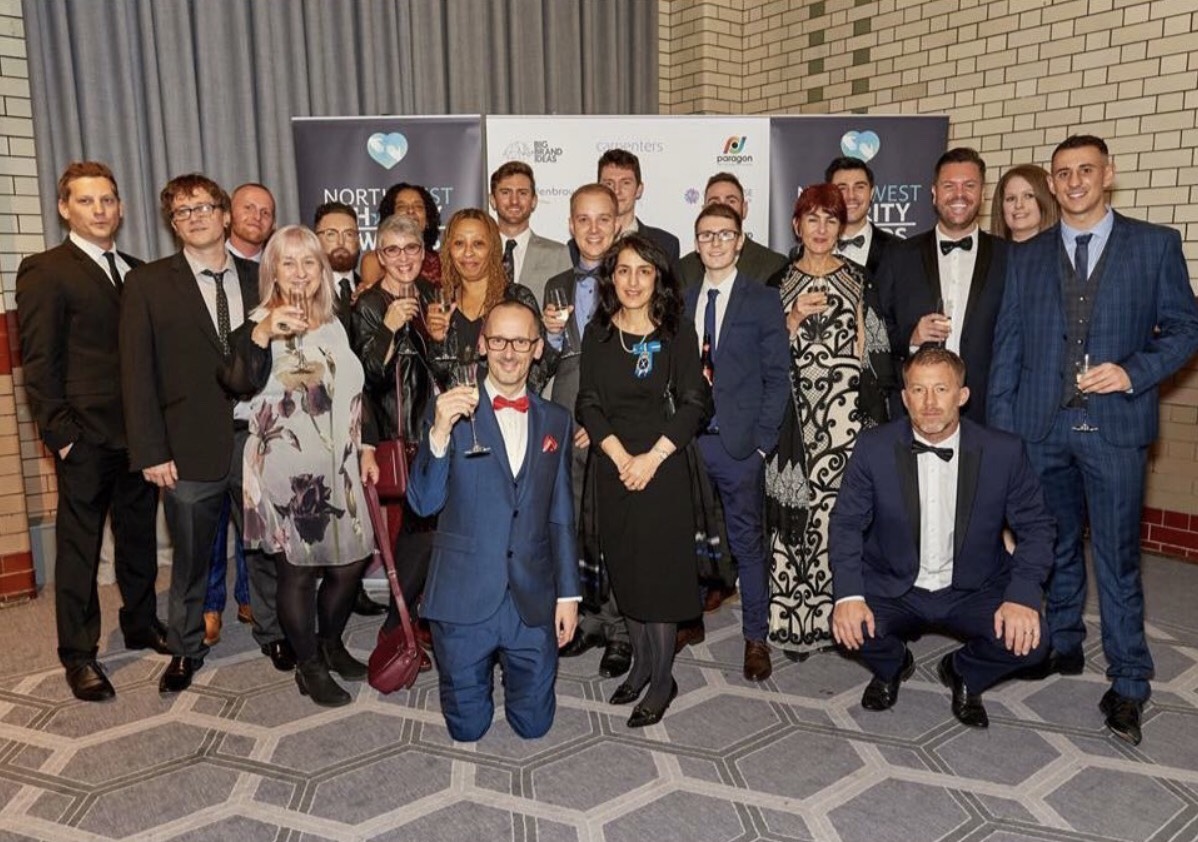 On Friday 12th October, the staff team, board, Ambassadors and a couple of special guests all joined together to attend the 2nd Northwest Charity Awards, this year held at the Principal Hotel in the heart of the city.
Survivors Manchester had been shortlisted for 5 separate awards: Charity Trustee of the Year, for our very own Chair Craig Harris; Social Media Campaign, for our #BreakTheSilence; Fundraising Event of the year, for our Ambassador Sam Thompson’s #48HourMix; Celebrity Ambassador Award, for our Ambassador, Comedian Richard Gadd; and Charity of the Year – Rising Star.
From an idea in my head over 10 years ago, to being shortlisted for 5 separate awards was so overwhelming for me, likewise, I know many of the team felt this too, particularly those that have been on this huge journey with me.
We all arrived at the Principle Hotel, a beautiful setting and all the guests were dressed from head to toe in their finery. In the reception area, we met our ambassadors, writer and entrepreneur – Charly Lester, Ex-Professional Footballer – Steve Walters and his wife, DJ – Sam Thompson and his girlfriend, Comedian and Writer – Richard Gadd, and Actor – James Sutton and his wife. This was the first time that practically all of those involved in Survivors Manchester were together and it certainly brought a tear to my eye.
We took our seats in the beautifully decorated dining room and were treated to the sound of electric strings by the amazingly talented String Infusion, who wowed us with some incredible music.
Following dinner, the awards began in style with a wonderfully inspiring speech from one of last year’s winners.
The first category we were nominated in was Charity Trustee of the year and the winner was…. CRAIG HARRIS! Our very own chair won! The room was filled with noise (from our team) and straight away I knew that this was going to be a good night for us. The hosts read out why the judges chose Craig and they got it spot on, because he gives up so much time in his packed life to be our chair and has helped us go from a small charity to a medium one with huge impact.
Next a special recognition for Ambassador, Sam Thompson, for the incredible effort he made in raising funds for Survivors Manchester through his #48HourMix – which I’m still getting over the emotion of! Well done Sam, thoroughly deserved and so proud of you.
This was followed by Celebrity Ambassador Award to Comedian and Writer, Richard Gadd. Richard has literally dashed up from London where he is working on a brand new comedy and getting ready to star in the new BBC Three series Clique. the judges commented on Richards bravery in using his lived experience of sexual violence in his work, particularly the award winning Monkey See Money Do, which won tremendous accolades and was aired on Comedy Central as part of SoHo Live. Well done Rich, we love you!
I was honored to get up and accept special recognition award for our Social Media Campaign #BreakTheSilence, which is certainly the hard work of our Comms Lead, Becky Roberts – Well done Becky and team.
Then finally, as I sat with the team, the winner of Charity of the year – Rising Star was SURVIVORS MANCHESTER! I think at that point my ears popped with the amount of noise and I stood there and watched all the staff take to the stage to collect the award! What a sight it was for me. Wiping away the tears of joy and pride, I was reminded just how incredible this amazing workforce is.
So, shortlisted for five awards, received recognition for them all… that’s 5 out of 5!
But the night wasn’t just about the awards, it was about saying a huge thank you to the team who put so much effort into their work; it was about bringing everyone together to meet each other; and it was about giving those survivors who use our service the very clear message that people recognize us and recognize the issue of male sexual violence. At least 5 times that evening that whole room talked about Survivors Manchester and what we do. At least 5 times that evening, people recognized male sexual abuse, that’s the biggest award of all.