So, in a penguin suit with my better half last week, I attended the 2018 North West Charity Awards and If I had to describe it in one word it would be WOW. 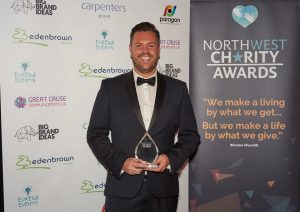 For those who know me I am rarely lost for words but the overwhelming pride I felt for the Charity, its team and all of our survivors was of stellar proportions rendering me speechless on the night. Not only was I stunned and impressed for being shortlisted in five categories in the 2018 NW Charity Awards but “sweeping the board” winning an award in each category, left me an emotional wreck but proved we a Charity firmly on the map!
The excitement and buzz in the spectacular ballroom style room (in the Principle Hotel Manchester), had a Hogwarts feel, it created the best conditions for a celebratory event and was simply the best location for what turned out to be a monumental event for our Charity, but also for everyone else who attended, who was up for awards and won, and most importantly for all the people they represented and supported.
So as a proud parent and in true ‘show off’ style I can honestly say that being present and watching the team, Ambassadors and the board receive recognition for all the hard work, commitment and effort was one of the greatest moments of my life, after adopting my little boy!
Firstly, Richard Gadd one of our Ambassadors won Celebrity Ambassador of the year and if you haven’t read his speech, as he didn’t get to do, then you need to as I cannot put into words how well deserved this award was!
Then our Chief Exec Duncan Craig and his fabulous team received the highly commended award for our social and digital campaign #breakthesilence. There isn’t a CEO on the planet that’s more invested and dedicated to an agenda than Duncan, he’s a giant in his profession, with a career that history will record as one of the most significant epochs of time for male survivors. The impact of his, and the charities work, has been life changing for many and he leaves a legacy not to be forgotten. He is the kind of human being one should inspire to be and my hero.
I now move on to Sam Thompson a Survivor and ex user of our services, a true champion who flies the survivor flag high and proud. He also received an accolade and a won a highly commended award for his fundraising challenge – a 48-hour non-stop DJ set. This is a truly courageous man whose bravery has inspired so many.
Finally, and a surprise to some but expected by many, winning the Rising Star Award and standing on the stage with all the team, board and Ambassadors, felt like I had won the lottery! One of the best moments ever.
And I couldn’t sign off without also describing my shock but absolute gratitude for winning the Charity Trustee of the year and being recognised for the small role I play in this team. I am humbled and privileged to support the Board and team in this role and couldn’t believe I actually won when I was up against the Blackpool RSPCA charity, everyone loves a donkey but then again some may say a donkey won?