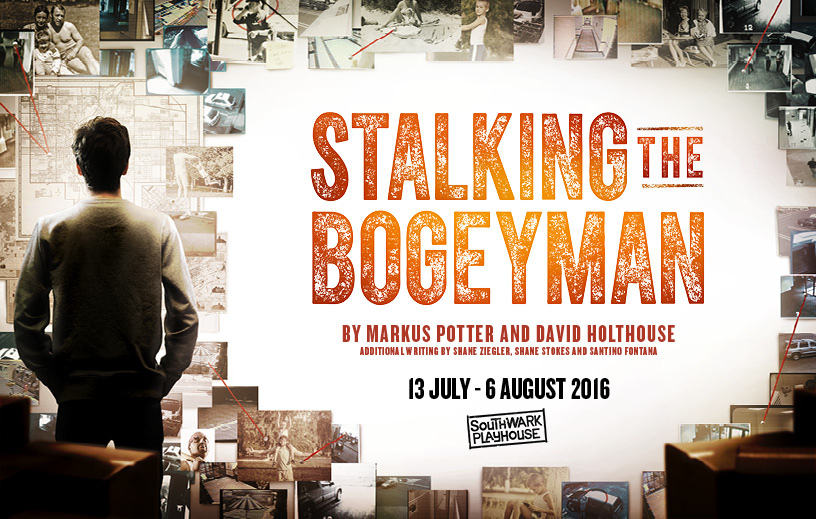 After reading so much about Markus Potter and David Holthouse’s play, Stalking the Bogeyman, and seeing the impressive reviews for this London production, I must admit I was nervous that it wouldn’t live up to my expectations… something I think that is part of my legacy as a survivor, living up to expectations.
I needed not to worry!
This dark and painfully emotive 90 mins of intense theatre is the most beautifully inspiring experience I have had since I first sat down in the middle of room in Wiltshire with 25 other men and for the first time in my life said… “Hello my name is Duncan and I was sexually abused, I am a survivor”.
This hard hitting piece of incredibly crafted drama is based on real life events, centering around the life experiences of David Holthouse, a journalist for the Denver Westwood, whose past comes back to haunt him even more than it already does when Nathan, a childhood ‘friend’, moves too close for comfort and David is forced to face the bogeyman – the person that sexually assaulted and raped him at the age of 7.
What is so unique about this piece is the brutal honesty of the dialogue that faces you as the audience as you sit immersed in the same rooms that the events in David’s life takes place. It’s just such a different experience than sat on the sofa at home or in the cinema watching a film or documentary. The closest feeling I could liken it with is that feeling in your belly when you sit in a therapy or peer support group and you hear someone say something and you think.. SHIT! I THOUGHT THAT WAS JUST ME! or when your sat in a conference and you hear someone say something that brings that tear to your eye or that bit before you get a lump in your throat. If you’ve ever experienced any of that then that’s how you’ll feel.
David and Markus (Script Writers/Director) have produced something that is more than a script, more than a play. They have produced an access point for the world to understand the true reality of being a male survivor, and intricacies and complexities of living with the biggest secret one can ever have, the secret that at some point someone took over the control of every cell of your body and used it solely for the purposes of their own sexual and emotional needs. No one has done this before, I’m sure of that.
But its not just the writers that have created this, the cast have a huge part to play in this too.
The small cast, including Amy Van Nostrand and Glynis Barber expertly take the words from the page with so much care and attention that you could wholly believe that they speaking what is organically their own.
Barber, probably best known for her role in Dempsey and Makepeace, delivers a performance that I suspect every mother that has ever found out her son was sexually abused as a child could relate to. As she sits in David’s house staring at him, I was instantly taken back to that moment I sat in my own parents house when I decided it was time to make that step and disclose. The look on Barber’s face is reminiscent of the look on my own mothers face, it’s the look of trying to work out how she could have ‘missed it’ and the moment of self blame, when in fact she missed nothing and wasn’t to blame as there was no individual signal that could have indicated. That’s the thing about sexual abuse, everyone thinks that there are signs… only in hindsight!
Mike Evans talent as an actor enables him to perfectly create the bogeyman monster and the human himself at he very same time. He manages to show mans’ capacity to act in the most brutal way, juxtaposed with the ability to momentarily be compassionate, albeit surface. I’d imagine an extremely difficult character to execute on stage without making him grossly stereotypical ‘sex offender’. Well done Mike, hats off to you.

But it is Gerard McCarthy that I save my most personal praise for.
It is clear to me, having gone through a hugely personal process with actor James Sutton when developing the Hollyoak’s storyline of John-Paul’s rape, that McCarthy has sought to find out from David Holthouse the very essence of what is it like being a male survivor. I can also imagine how important this is to Holthouse to see McCarthy pull off such an incredibly important role.
From the delivery of the lines, to the deep sadness in his eyes, McCarthy’s is a performance that only few actors will ever be able to achieve. This is a performance where I literally forgot that I was watching an actor play a character and fell into feeling like I was listening to David himself, from one survivor to another. This took me back to that moment seeing James, playing John-Paul, look at himself in the mirror and all I saw was me. It took my breath away, literally. There were other moments where chills ran down my spine as I heard the words soar out of McCarthy’s mouth, it felt like they were mine, as if he had seen the very inner childhood thought diary and was reading from it.
My whole career, before starting Survivors Manchester, was based in the theatre and I have seen hundreds of productions but never one where I’m sat nodding in total agreement with a character and desperately controlling my desire to shout ‘absolutely brother!”.
Bravo to Southwark Playhouse for having the balls to stage this. Bravo to David and Markus for having the balls to write and direct this. Bravo to the cast for having the balls to perform this night after night.
and bravo to my fellow audience members on that performance, for sitting together and seeing for real, the experience of a male survivor. Maybe one of them went back and spoke to the man in their life (there’s 1 in 6 of us you know) and maybe that man spoke out.
This isn’t just a play to be reviewed, this is something that is life changing.
Go and see it whilst you can!
Check out www.stalkingthebogeyman.com