In mid 2013, Lime Pictures contacted us here at Survivors Manchester asking for our help on a storyline involving the rape of a central male character. That storyline is what we now know as the John Paul McQueen/Finn O’Connor story that is gripping the TV audience and having a huge impact on #breakingthesilence that surrounds the sexual abuse and rape of boys and men.

The announcement in the press in October 2013, prompted a flurry of activity and headlines in newspapers talked about the story, prompting heated debate on social media.

The discussions in the media didn’t stop there are here at Survivors Manchester, we were asked interviewed and asked to comment on a number of occasions, including:
Digital Spy – Q&A with Duncan Craig
The Irish World
Broadcast Now

Then on 9 and 10 January 2014 E4 and Channel 4 aired the episode. The public reaction was phenomenal with even the harshest of critics praising actors James Sutton and Keith Rice along with the writers and directors (and in some cases Survivors Manchester itself for the support in developing this story) for creating such a powerful episode.

Again, the media reported public opinion (and their own) which all added to a push to #breakthesilence We had numerous people contact us asking for help, stating that they had found the courage to speak out because it felt like the issue was finally being talked about in society.

Ever the fantastic supporters, Hollyoaks actors James, Keith, Charlie and Lizzie helped us promote out Survivors Guide with these amazing photos:

The story has gathered momentum and gripped many households across the UK and we continue to be involved in helping the fantastic writers #breakthesilence and develop this ground breaking story. One young supporter and Hollyoaks viewer sent us this in: 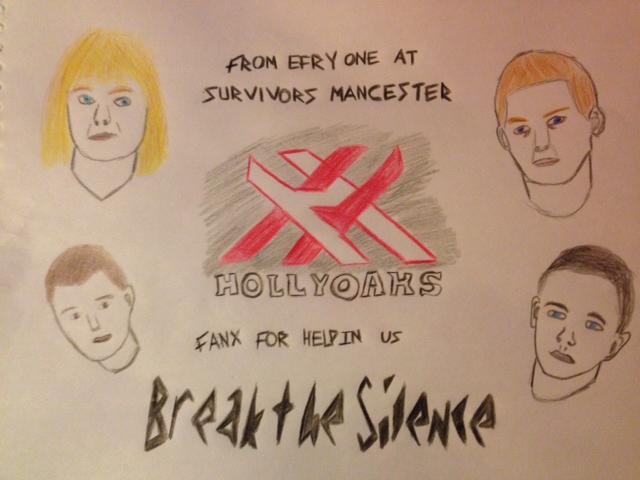 The story has done so much for breaking the silence for male victims of sexual abuse, rape and sexual exploitation. It has also catapulted Survivors Manchester into the media spotlight, which has meant that more people know about our work and where they can get help. The storyline has been a hot topic of conversation at our Peer-Support Groups, on our Twitter page, and has been the single most common reason why lads are coming forward when asked at assessment.

Lime Pictures committed to telling this story properly and they haven’t failed. 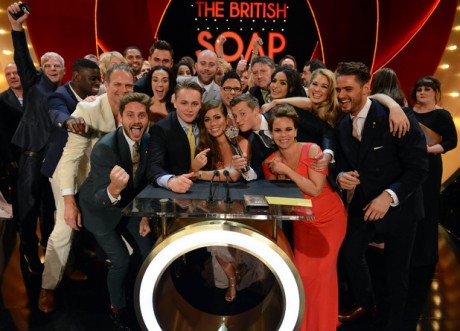 We were delighted to be able to share in their recent highlight of the year when they won Best British Soap at he British Soap Awards, where they were also nominated for Best Single Episode for the John Paul Rape Ordeal.

This inspired more creativity from one of our younger members: 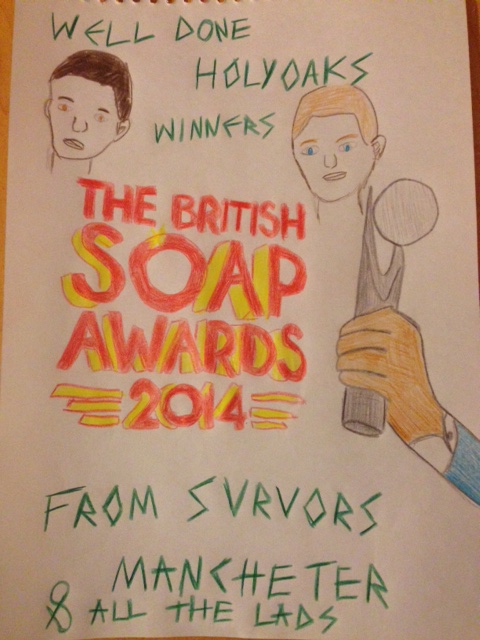 Throughout the story, Hollyoaks have been incredibly sensitive to the impact on viewers and have created some fantastic support videos: