With Christmas now a distant memory, we are on the home stretch to having the guide in our hands! It’s so exciting but we’re not there yet.

Due to a few technical hitches with the actual physical production, we are running slightly behind schedule, but we will be printed and distributed throughout March and April, so watch this space! 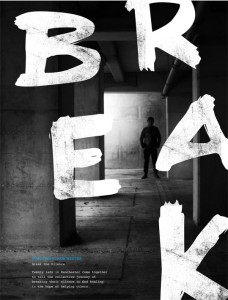 Overall, the project has been a huge success and we cannot thank The Peoples Health Trust and Zurich Community Trust enough. Without the funds they provided, we couldn’t have produced this inspiring publication!

At periods throughout the lifespan of the project, members of the team completed a small questionnaire called CORE 10 that aims to measure wellbeing and hopefully show how this project increased participants mental wellbeing. 81% of participants CORE score’s fell under 5 which we see as a huge success! It means that being involved in this project has helped people feel better themselves!

At the beginning it was an uncomfortable process in putting this together, but the process has actually brought connection for some of us, healing for others, friendships have been made, support and understanding provided between us and finally the silence broken

For some of the lads, working together has been a new experience albeit sometimes a difficult one. It has meant that real listening to each other has had to happen and compromises have had to be made.

But what has been produced is out of this world.

You lads are amazing… (in alphabetical order) to Daniel, Danny, Duncan, KMan, Lee, Jason, Jim, John, JT, Mark, Michael, Micky, Sam, Terry and all the other 6 survivors we have worked with since the project began.

and thank you to Brene, Carole, Cath, Duncan, Jo, Joanne, Julie, Martin, Mark and Tom for your professional support.

All the lads wanna say a huge and special thanks to Michael Atkins, and JAMcreative’s Dave Gee and Richard Pay for the incredible creative work they have done to make this guide look as amazing as it does!

Last word goes to one of the lads…