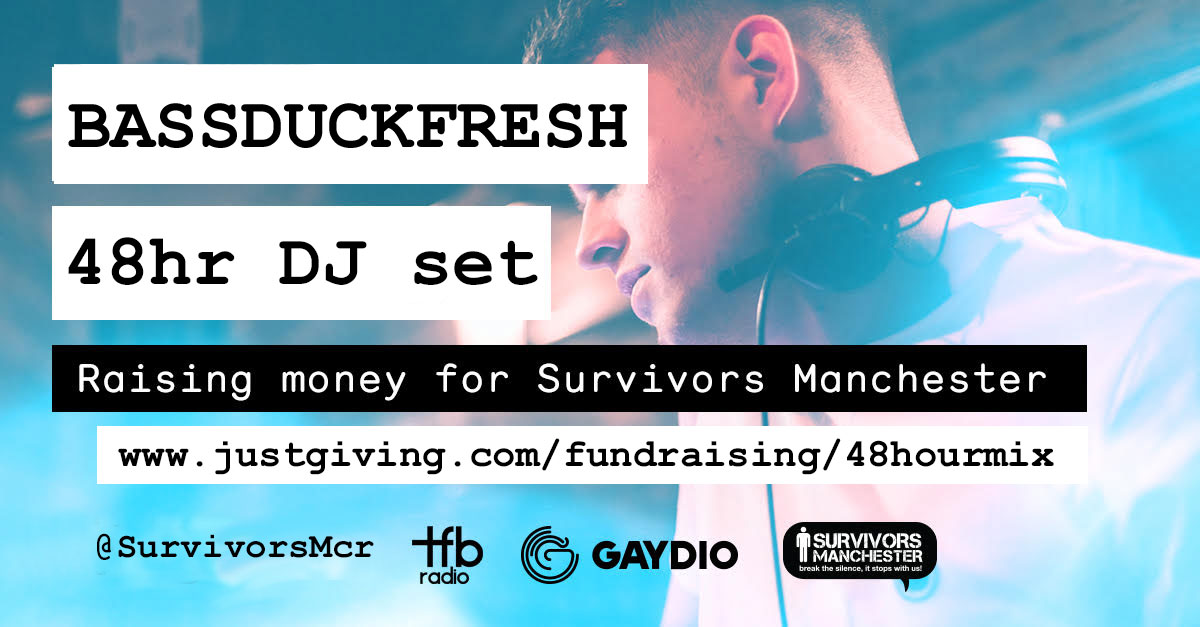 Male rape victim and DJ, Sam Thompson, is calling on local and national businesses to support his 48-hour non-stop marathon radio show.
DJ Sam Thompson, 22, is preparing to take to the decks for two days straight to raise awareness of male rape and sexual violence against men and boys.
The mammoth 48-hour long radio show will see Sam, who works under the name DJ Bassduckfresh, play a non-stop set on his radio show on TFB Radio from 7pm on 21 July to 7pm on 23 July 2017, live from Manchester, thanks to the generosity of Toby Whitehouse and team at the Gaydio studios.
Having been a survivor of male rape last year, Sam bravely spoke out about his experience and wants to raise awareness of the work and support Survivors Manchester gave him and provides for others, as well as raise much needed funds.
Sam said:

“When I was attacked last September, I desperately needed help and support to get me through it and Survivors Manchester was there for me. There are so few charities available to help men who have been raped or sexually abused that I wanted to help raise awareness and encourage people that help is out there and to break the silence.”

Businesses from around Greater Manchester and beyond are being asked to pledge their support for the initiative by sponsoring an hour of the show for just a £100 donation.
Sam will also be grateful of any kind of deliveries of food and drink to help keep him and the team of officials going throughout the 48-hour mixathon. Any eateries or retailers wanting to donate should contact Becky ay JAMpr on becky@jampr.co.uk.
For businesses wanting to donate, please go to Sam’s Just Giving page, pledge £100 and leave your company name and details – https://www.justgiving.com/fundraising/48hourmix
Duncan Craig, CEO of Survivors Manchester said:

“Survivors Manchester is humbled to be able to receive this support from Sam and are extremely proud of him for using his experience to create something extremely positive and let men know its ok to speak out. I would also like to give huge thanks to everybody supporting him in his one of a kind fundraising attempt.”

“I’m excited and ready to throw myself into this epic DJ challenge and feel immensely proud to be supporting such an amazing charity – Survivors Manchester.”