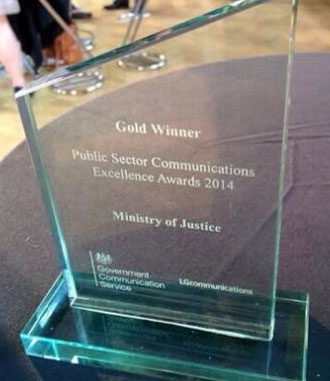 We are absolutely over the moon to find out that the #breakthesilence campaign won Gold! at the Public Service Communications Award which were held in Manchester.
This particular part of the campaign, facilitated by the Ministry of Justice Communications Team, involved Survivors Manchester, Hollyoaks, The Survivors Trust, Survivors UK and Mankind working together to #breakthesilence of the sexual abuse and rape of boys and men.
The campaign involved taking to social media to make a noise, using a Thunderclap; challenge the myths and stereotypes using actual data gathered from crime statistics; and the production of a short docu-film starring Hollyoaks actor, James Sutton, and Survivors Manchester CEO, Duncan Craig (click here to see the film).
Congratulations to all the partners involved in this AWARD WINNING CAMPAIGN! and here’s to more silence breaking in the future!
For the full list of winners, follow this link:

The winners of the 2014 Public Service Communications AwardsGCS.