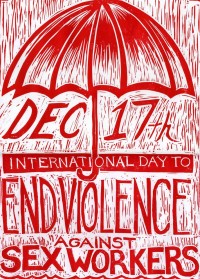 Today (17 December) is International Day to End Violence Against Sex Workers and here at Survivors Manchester we are committed to doing just that.
Originally conceptualized by Annie Sprinkle and initiated by the Sex Workers Outreach Project USA as a memorial and vigil for the victims of the Green River Killer in Seattle Washington, the day has grown across the world with the aim of empowering workers from cities around the world to come together and organise against discrimination and remember those sex workers who have been victims of violence.
Over the pond here, the UK Network of Sex Work Projects (UKNSWP) members work hard to ensure that those engaged in sex work have the support they need to be as safe as possible and find strategies to exit.
In April 2012, a pilot scheme called National Ugly Mugs, funded by the Home Office, began with the aim of providing sex workers with information to warn them of people who pose a risk to them or may potentially hurt them. The scheme also enabled the collection of intelligence and helping sex workers report incidents to the Police. The pilot ended in March 2013 and the evaluation was published. You can download it by clicking here. The scheme has helped many male and female sex workers and aided the authorities in the successful prosecution of a number of perpetrators of sexual abuse and rape. Survivors Manchester’s own trustee, Alex Bryce, is the head of the National Ugly Mug scheme and works hard to promote membership of the scheme. As organisational members, we know first hand how important NUM alerts are to promoting safety.
This year, we would like to honour all those that have passed away this year, in particular the males amongst the memorial roll call: