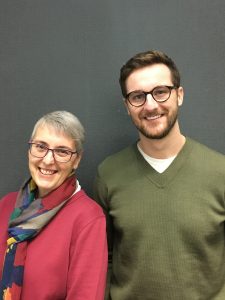 Survivors Manchester Responds to Rise in Demand for Support with New Hires
Survivors Manchester, a Greater Manchester charity that provides support to male survivors of unwanted sexual experiences, has recruited four more trauma informed therapists to help cope with the increased demand for support among male sex attack victims.
Counselling and Psychotherapy graduate Carl Turner and former Trafford Rape Crisis therapist Allison Lobley are two of the latest recruits that have joined the charity, which campaigns to #breakthesilence and remove the stigma that often accompanies male rape and sexual abuse.
In the month following Coronation Street’s male rape storyline earlier this year, Survivors Manchester had a 64 per cent increase in referrals – an increase which has seen the therapy team grow to match demand for help.
Speaking about joining the team, Carl said: “I’ve always had a keen interest in supporting men to engage in therapy and challenge the social construct of masculinity – it’s okay to feel vulnerable. Survivors Manchester is foraging a new path for male survivors and I was blown away by the pioneering work that the team is doing and I knew I wanted to be a part of it.”
Carl’s thoughts were echoed by Allison, who joins the charity as a part time trauma informed therapist. She said: “I previously worked at Trafford Rape Crisis and also volunteered at Manchester Rape Crisis, so I have a wealth of experience in this field. I’m proud to be a part of an organisation that is breaking down barriers and getting more men talking.”
Survivors Manchester and its ambassador, Sam Thompson, worked with Coronation Street scriptwriters on the David Platt storyline, which saw him be raped by Josh Tucker, a character he believed to be a friend. Duncan Craig, CEO of Survivors Manchester, said: “It was an honour to work alongside Coronation Street to bring what is a difficult subject into the public domain. We wanted viewers at home to identify with David and what happened to him, with the view that this would start conversations.
“38 people contacted our service through a helpline over the space of just 15 hours after the rape was initially aired back in March – that’s 38 people we can help work through personal and sometimes painful issues. We needed to expand the team in response to this increase in demand and we know Carl, Allison and the rest of the new recruits will fit in perfectly.”
For further information on Survivors Manchester, please visit www.survivorsmanchester.org.uk or follow on Twitter, @SurvivorsMCR, Facebook @SurvivorsMcr and Instagram @SuvivorsMCR
For further editorial information please contact Becky Roberts at Survivors Manchester:
Tel: 07878 771615 or email: media@survivorsmanchester.org.uk