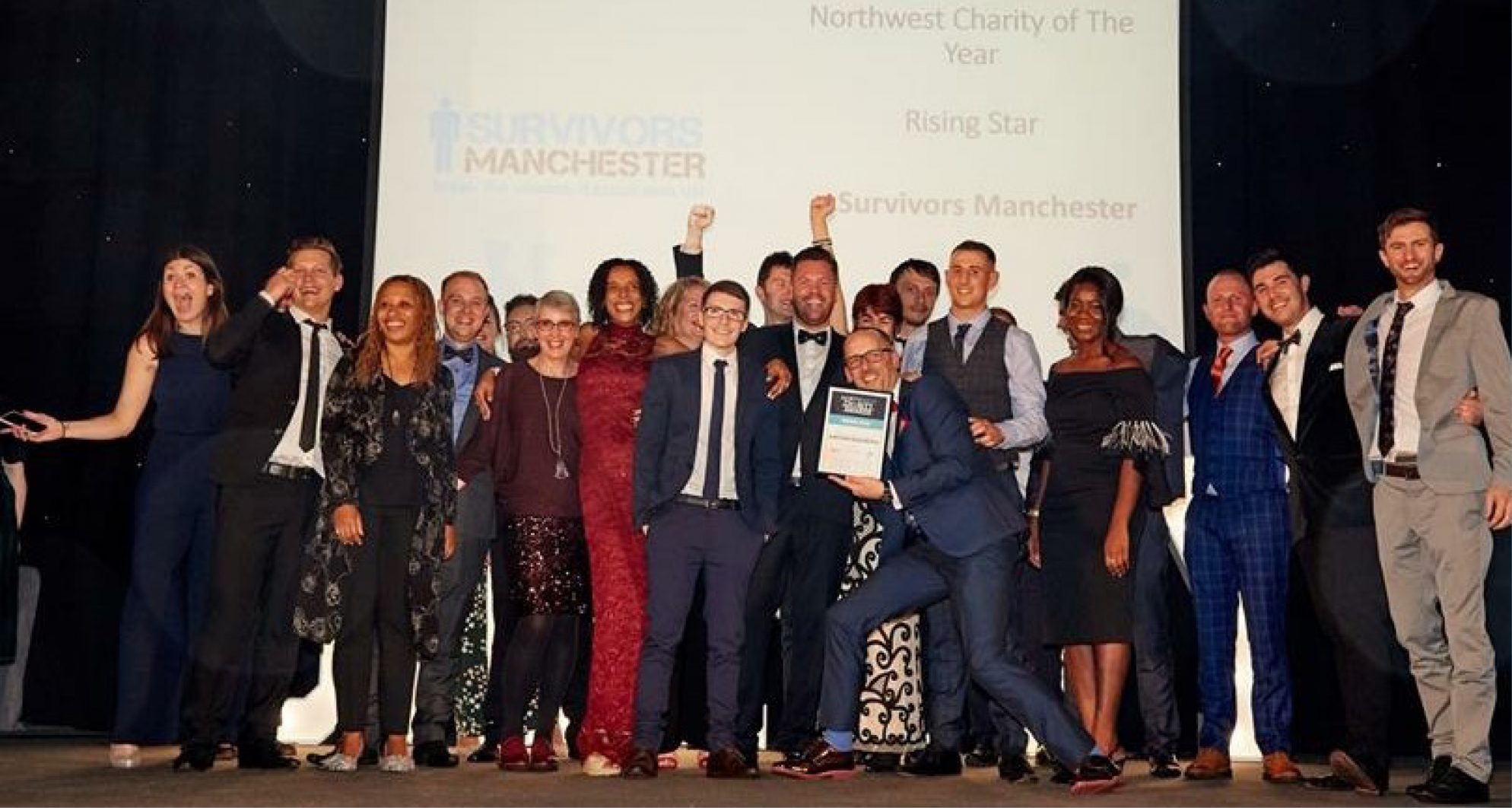 We swept the board at the North West Charity Awards 2018

Survivors Manchester, a Greater Manchester charity that provides support to male survivors of unwanted sexual experiences, swept the board at this year’s North West Charity awards, walking away with five gongs.
The awards, which took place on Friday 12th October, were held at the Principle Hotel, Manchester and saw over 400 people join together to celebrate the incredible work undertaken in the third sector across the North West.
Craig Harris, Chair of Survivors Manchester, was named as ‘Trustee of the Year’ in recognition of his passion and commitment for the charity, and for the amount of time he dedicates to help grow Survivors Manchester into the sector leading organisation it is today.
Comedian and writer Richard Gadd, who is about to star in the BBC Three series Clique, was presented with a special recognition award and commended for sharing his personal experience so publicly in his award winning work, Monkey See Monkey Do, to help raise awareness and much needed funds for the charity.
Duncan Craig, CEO of Survivors Manchester said: “From an idea in my head over 10 years ago, to being shortlisted and receiving five separate awards is so overwhelming for me. I couldn’t be prouder of the incredible team we have and for winning these awards.”
Survivors Manchester also gained ‘highly recommended’ awards for its social media and digital work and for the fundraising event organised by ambassador, Sam Thompson, which saw him DJ online non-stop for 48 hours raising over £6,000 for the charity. Sam recently appeared in the BAFTA nominated documentary, Raped: My Story, and worked with Duncan Craig on the ground breaking David Platt rape storyline on Coronation Street, much of which was taken from Sam’s own story.
The evening culminated with Survivors Manchester being crowned as ‘Rising Star’ in the North West Charity of the Year category – a huge accolade for the local charity.
Craig Harris, Chair of Survivors Manchester commented: “From having seen the charity blossom over the last 10 years to be the organisation that is shaping the national conversation around provision for male survivors of unwanted sexual violence, advising TV serial dramas such as Hollyoaks and Coronation Street on pioneering storylines, to now achieving multiple awards at the biggest ceremony for the third sector, it is simply incredible. As the Chair of the Board I couldn’t be prouder of everyone at Survivors Manchester and the invaluable work it is doing.”
For further information on Survivors Manchester and the services it offers, please visit www.survivorsmanchester.org.uk or follow on Twitter, @SurvivorsMCR, Facebook @SurvivorsMcr and Instagram @SuvivorsMCR
For further editorial information please contact Becky Roberts at Survivors Manchester:
Tel: 07878 771615 or email: media@survivorsmanchester.org.uk